CARE HomeBlogVanuatu: A future for Futuna 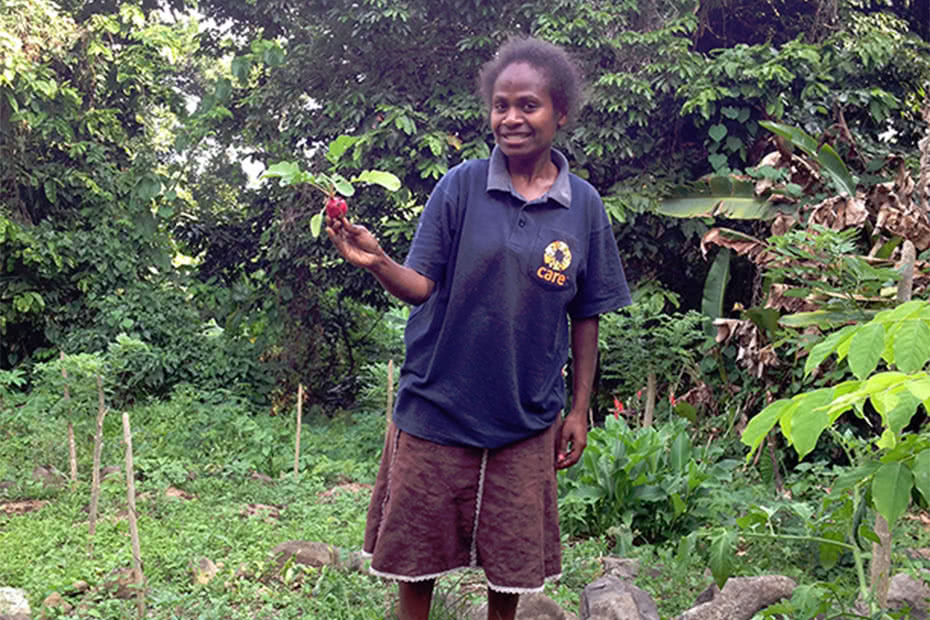 Mala Silas is involved in a project to help the people of Futuna in Vanuatu build home gardens to bring them more food that can handle changing weather. patterns and diseases. ©CARE

Around the world, the climate is changing.

Here in Vanuatu, the ocean has been getting warmer and more acidic. Scientists are predicting that cyclone patterns will change, we’ll see heavier rainfalls, a wetter wet season and a drier dry season. We’re already seeing the sea rising six millimetres per year in the capital, Port Vila; higher than the global average. For many people, the ocean rising by a few centimeters doesn’t sound like much, but for those of us living in small island nations like Vanuatu, it will mean the waves are coming higher than ever during storms; changes to where and how we get our food; and fishermen, farmers and growers face more uncertainty.

The UN has today published a report on climate change impacts around the world. Put together by hundreds of the world’s leading scientists, the report indicates a tough future for us here in Vanuatu. This is the most comprehensive scientific report produced about the impacts of climate change, and it shows that climate change is happening and, so far, countries like Vanuatu aren’t ready for it.

Last week I was on the island of Futuna, a place that, even by Vanuatu standards, is quite remote. There are no roads (just rugged footpaths) and only a couple of boats to get between communities. There’s little or no mobile reception and poor radio coverage. People in Futuna mostly rely on the land and the ocean for their food, and their water comes from natural springs which are a long walk from home. In dry times, water is harder to find, and in floods, the soil runs off the gardens, and with more erratic weather and a rising sea, the job of growing or gathering food is becoming tougher. It’s particularly tough for women in Futuna; they are often isolated by cultural traditions that keep them at home and silent in community meetings.

With CARE, I’ve been involved in a project to help the people of Futuna build home gardens to bring them more food that can handle changing weather patterns and diseases. Before the project, the people of Futuna mostly ate boiled fish and boiled cassava (a root vegetable common in the Pacific). If they wanted to eat any other vegetables, they had to send money (which was, of course, hard to come by) to islands many hours away by boat. As well as helping to introduce these new, durable crops, CARE has run classes on food storage and cooking (using traditional and modern methods). This means families on Futuna will have food all year-round, and they are no longer relying on just one or two types of food. Despite the cyclones that frequently pass across Vanuatu, the communities of Futuna are now much more resilient, because they know how to store and preserve food and protect the fresh water they have.

Many families on Futuna now have gardens next to their houses. They grow vegetables like cucumber, carrot and tomato. Jeannine Roberts, a mother of four from Futuna’s Mission Bay, told me that her children are now eating more and are much healthier, because they’re eating more than just boiled fish and cassava.

When I first arrived on Futuna a few years ago, I wouldn’t have seen a woman stand up or speak during a community meeting; they were too shy and didn’t seem comfortable getting involved. When I was back in Futuna again last week, I was reminded of the progress that’s already been made. Seeing the women standing up to talk – even challenging the men – was something very special. These inspiring women have plenty of knowledge about their local environment, gardens and households, and I feel lucky to be working with them to improve their lives and break down many cultural and social barriers.

Futuna is just one small island among hundreds across Vanuatu and hundreds of thousands across the Pacific. But the progress there – achieved through teamwork and giving women a voice – is a great example of what can be achieved in the face of a changing planet.

Mala Silas is a climate change field officer with CARE International in Vanuatu. She works with the team on Yumi stap redi long climate change (The Vanuatu NGO Climate Change Adaptation Program) which is supported by CARE, Oxfam and the Australian Aid program.

What a brilliant concept & an obviously positive change for Futana! Great work!