CARE Australia and the Australian cricket community have partnered in a moving event to mark 10 years since the Boxing Day tsunami, with 10,000 letters of thanks from tsunami survivors delivered to cricket fans at the Commonwealth Bank Boxing Day Test.

The Thanks for Caring Australia campaign kicked off today with the arrival at the MCG of the ‘CARE package of thanks’; a giant crate containing 10,000 authentic letters of thanks from tsunami survivors to Australians. With the help of hundreds of volunteers, the letters have been distributed to cricket fans at the MCG, and online at www.care.org.au/thanks.

Australian Cricket Captain Michael Clarke, who recorded a moving video message shown on the big screens at the MCG, said the letters of thanks from tsunami survivors told the story of how Australians respond during times of disaster.

“Ten years ago today, the Boxing Day tsunami ravaged 14 countries – including India, Indonesia, Sri Lanka and Thailand, and Australians dug deep to support our friends and neighbours when they desperately needed our help.”

“The Thanks for Caring Australia campaign is an opportunity to recognise how Australians respond during times of crisis, and I’m proud to get behind it. I urge everyone to read and share the letters of thanks from tsunami survivors at www.care.org.au/thanks and using the hashtag #thanksforcaring.”

An estimated 230,000 people were killed and almost two million were left homeless when a magnitude 9.3 earthquake struck off the coast of Aceh, Indonesia, triggering a series of tsunamis that impacted 14 countries.

The remembrance event was part of a joint partnership between CARE Australia and Cricket Australia’s community action program, Cricket Cares. CARE Australia CEO Dr Julia Newton-Howes AM said Thanks for Caring Australia was about showing Australians the impact of their support and how this changed countless lives after the devastation of the Boxing Day tsunami.

“The 2004 Boxing Day tsunami is something the world has never forgotten, and generous donations from millions of Australians helped CARE delivered vital packages of aid, save lives and build stronger homes and businesses. On behalf of the many thousands of families Australians supported through CARE, we want to say thanks and show Australians just how truly vital their support was.”

Dr Newton-Howes said the letters told inspiring stories from people across India, Indonesia and Thailand, and encouraged Australians to visit www.care.org.au/thanks and use the hashtag #thanksforcaring to help share the letters to other Australians.

“Each of these letters tell inspiring stories of resilience, recovery and of the impact of Australian aid. I urge everyone to visit www.care.org.au/thanks, and to share the stories of tsunami survivors helped with Australian support.”

CARE Australia is an international humanitarian aid organisation fighting poverty, with a special focus on working with women and girls to bring lasting change to their communities. 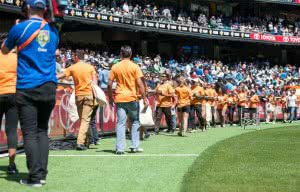 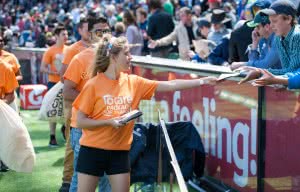 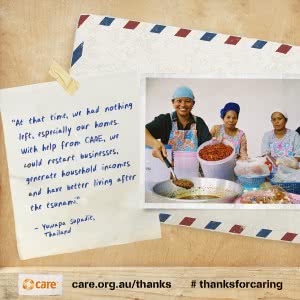 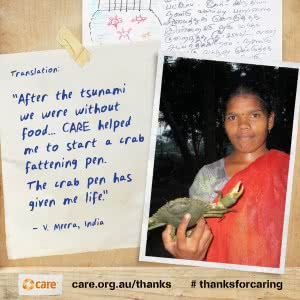 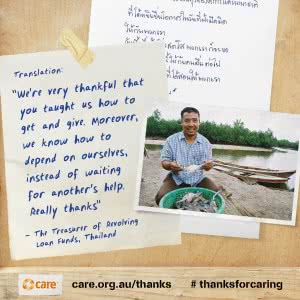 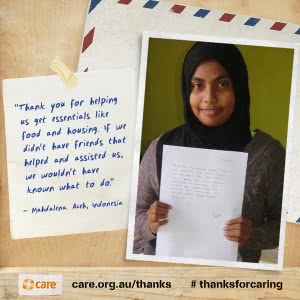 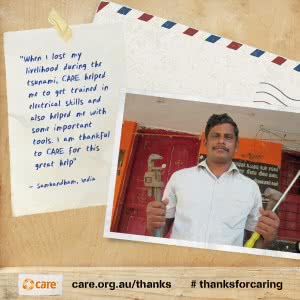