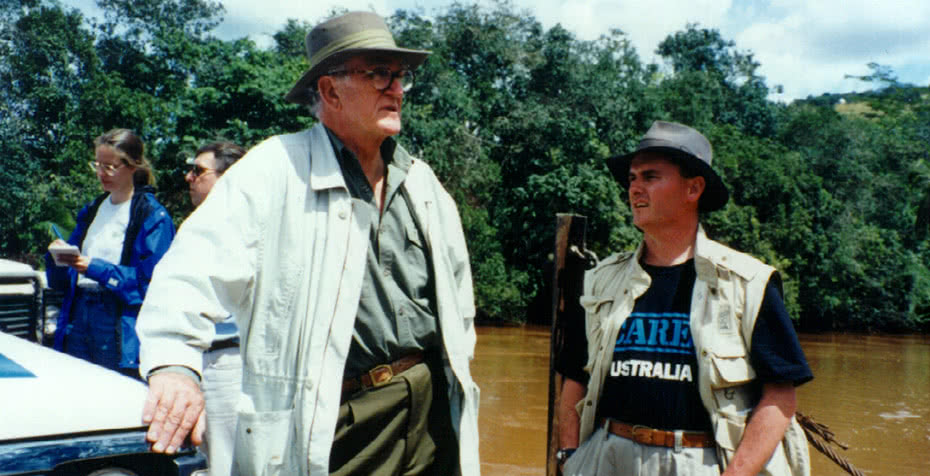 Rt Hon. Malcolm Fraser, AC, CH was the Founding Chair of international aid organisation CARE Australia and Chair from 1987-2001. He was also President of CARE International from 1991 to 1995, and its Vice-President for the next four years.

Through CARE Australia, Malcolm put Australia at the forefront of delivering emergency aid to countries around the world. Malcolm wanted to create ‘the Australian face of overseas aid’, believing as a country we had the responsibility, and the ability, to assist those in need, especially at times of disaster.

He believed that Australia’s ‘can do approach made a major contribution to providing life-saving essentials like food, water, shelter and healthcare to people in desperate need.

Malcolm also strongly supported long-term development work, because it tackled systemic issues people in poor communities, especially women and children, face every day. He believed that as rich and fortunate people, Australians had a responsibility to assist those in need.

As Chair of CARE Australia, and President of CARE International, Malcolm knew that the only way he could understand and support CARE’s work was to see firsthand the impact of poverty and humanitarian disasters. Malcolm visited CARE emergency operations in Iraq, Somalia, Bosnia, Rwanda and long-term projects in Cambodia, Jordan and Vietnam.

CARE Australia staff had enormous respect for Malcolm, who used his influence to mobilise the international community to meet the needs of those affected by humanitarian crises. Many remember him raising the unfolding Rwandan genocide with Nelson Mandela and other African leaders at Mandela’s inauguration as President, and challenged the African leaders to intervene and stop the bloodshed.

Staff who worked with Malcolm said he demanded quality – he did not want to know why something could not be done, but how it could be done. He constantly pushed for CARE Australia to excel in our work, to meet the real needs of the people we serve, and to be efficient in how we used the resources entrusted to us. His legacy lives on today as CARE Australia helps communities affected by the devastating Cyclone Pam in Vanuatu, and in 22 other countries around the world.

Malcolm will be remembered by all at CARE Australia as a passionate humanitarian and a fearless defender of human rights, who deeply cared for Australia and for people living in poverty and crisis around the world.

Our thoughts are with the Fraser family at this sad time.

Help Malcolm Fraser’s legacy to live on by donating to CARE’s work assisting some of the world’s poorest communities.

An eloquent and impressive politician and Prime Minister...and more importantly, a deeply caring human being who improved the day to day lives of innumerable people across the globe. Truly, a life well-lived.

Malcolm Fraser stood tall in every sense of the word as a great humanitarian.

We have lost a true humanitarian.who never gave up on the those who need our care and support.My thoughts go out to Tammy and the Family

Malcolm Fraser has made such an impact on not just me but far reaching,worldwide,with his deep compassion for anyone who is disadvantaged. Paul Keating said'I always thought Malcom would be around a lot longer. I must say,I wished he had been. And so do I. He has left a great legacy.

How refreshing to hear of a politician who cared so much for the poor and needy. In this day and age when so many politicians (and people generally) are only thinking of themselves it is great to hear of one that made such a difference to the needs of many. It also demonstrates that once you retire, there is still so much you can do for humanity. RIP Mr Fraser.

What a wonderful man! He really was a great example of what Australians should be living in our wonderful country.

The passing of Malcolm Fraser leaves me deeply saddened.

His life, example and works in the humanitarian sphere are a lesson to us all in sharp contrast to the obscene, indiscriminate, distributed world warfare being conducted by others today against the poor and disadvantaged in our world in many countries.

May Malcolm Fraser's example and leadership lead to the eventual improvement in the daily lives of all those in need so that they can live without ever present hunger, disease, violence and fear.

Your spirit lives on. Rest in peace.

We are saddened by the news of Mr Fraser's passing. It makes one reflect on past events shaped by him, guided by his integrity and compassion for humanity. He was one of the true great Statesmen - someone Australia could be proud to have represent them on the international stage. His knowledge of world issues and how they impact on everyday life for ordinary people demonstrates his ability to influence positive change, the world is a better place for him having been here. The Care legacy he leaves must now be nurtured by us all.

The personal tragedy felt by his family can not be softened, however, it is hoped solace can be found in kind words from ordinary people who support his vision by participating in Care Australia projects and will continue to do so.

Our condolences to the Fraser family and Care Australia at this sad time, but we reflect with pride as to what one individual achieved with quiet determination, presenting the compassionate face of Australia to the world. With Sympathy, Diana Schiller & Karin Schiller

Malcolm Fraser served the Australians as well the humanity at large very well. He had a big heart.

I write to share with you moments of sorrow for the loss of a great leader who dedicated his life and time for CARE Australia, his footprints and legacy in caring and providing for the poor and needy remains to be remembered by those he touched.

Malcolm Fraser has done more for Australian respect overseas than any other stateman from Australia without most of the public actually knowing, RIP Malcolm you were and still will be known as as a great Australian.

A great person, who did some really worthwhile things in his life. I admire and respect him enormously, even though I vote Labour!

It is sad to lose a well known Australian with such widely respected opinions.

Forget the politician, what a wonderful humanitarian!!!! RIP Mr Fraser

Malcolm Fraser was a good man and his words and actions highlighted this. Australia's rich cultural heritage is in part due to his good nature, policies and spirit of inclusiveness. His presence and enlightened approach will be missed and is of great loss to Australia.

A fine human being. Will be greatly missed. So sad. Thank you Malcolm.

Today I made a donation to Care Australia for Cyclone Pam Vanuatu. Was coincidcidental but in hindsight, a fitting tribute to Malcolm Fraser a great humanitarian and champion of social justce. Vale Malcolm Fraser.

Vale Malcolm Fraser, your contribution to Australia and the world is remembered and appreciated.