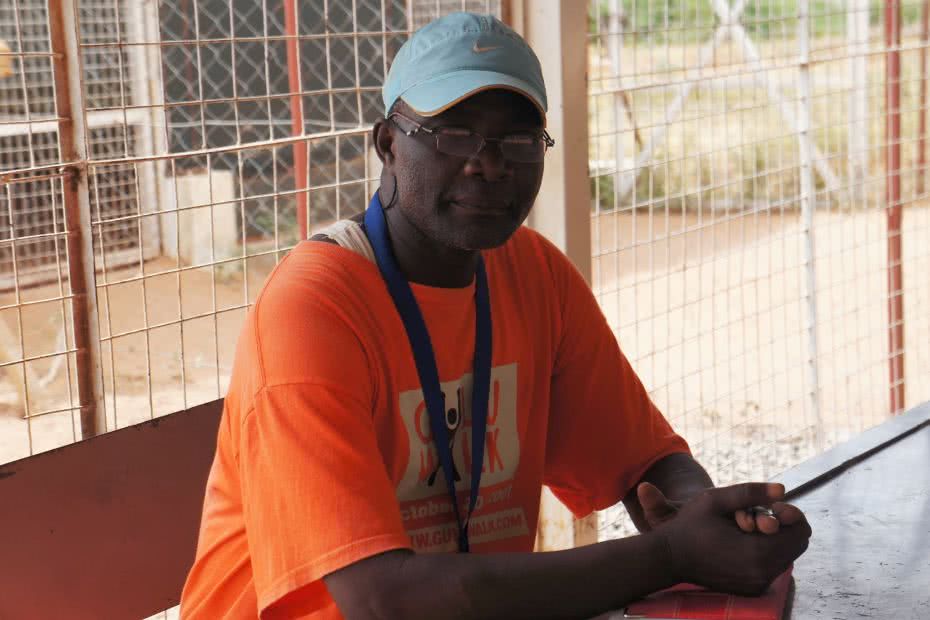 Uringi Sam Abott has been a refugee for almost two decades. Now, working closely with CARE, he is a leader in the Ifo refugee camp in Dadaab, Kenya helping to distribute food to fellow refugees.

Uringi Sam Abott, 54, still vividly remembers April 4th 1985. It was the day, 18 years ago, when he was forced to flee his native Uganda and became a refugee.

At the time, Sam was a young microbiology graduate living in Kampala, the country’s capital. When he fled his homeland, his first stop was South Sudan, where he lived as a refugee for seven years before crossing over to a camp in Ethiopia in 1991. It was there where he met his wife, another refugee fleeing South Sudan. But the couple’s life together, still just beginning, was soon disrupted when civil war erupted in Ethiopia and they fled to Kenya. The UN Refugee Agency eventually relocated the couple and their children to the refugee camps in Dadaab in eastern Kenya.

Sam joined CARE’s Food Distribution Team immediately upon his arrival in Dadaab in 2003. CARE contracts refugee incentive workers to work in refugee camps. They live in the camps and are given opportunities to earn money, learn new skills and help their family and community. For Sam, the opportunity was especially important because refugees in Kenya are not legally entitled to work in the country. Yet years of service as an incentive worker, coupled with hard work, have earned him a senior position in Ifo 1 refugee camp where he helps distribute food to more than 99,500 refugees. His core responsibility is to oversee and provide leadership to his workforce, consisting of 317 other refugee incentive workers. It can be a challenging job. He must ensure rations are distributed fairly, maintain order as his fellow refugees line up for food, and assist vulnerable groups such as pregnant women and mothers, physically-challenged individuals, elderly people, and children who sometimes are sent to collect food.

In late 2011, when the camps were experiencing heightened security issues, Sam confidently, successfully and single-handedly managed the food distribution activities himself with only long-distance support from the Kenyan staff, who were unable to visit the camps. “The pay I earn from CARE allows me to purchase other commodities for my family that are not provided for refugees, like sugar, milk, vegetables and sometimes medicine. I am also able to send my two older children some pocket money. That makes me a proud father. CARE’s emphasis on respect, integrity and commitment has taught me to be respectful of my fellow workers and refugees. I honour these values in my work as a community leader because I know how important they are in offering meaningful assistance to those struggling to start over.”