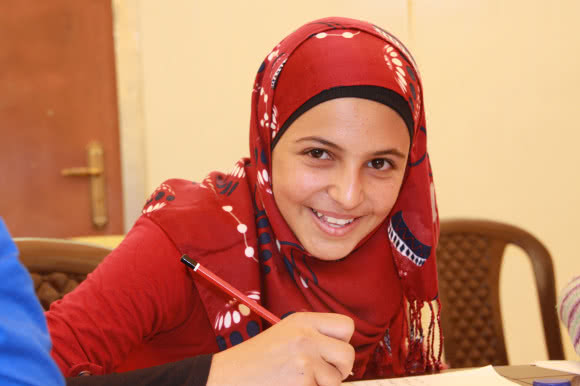 “I want to write about child marriage. Some of my friends, who are as old as I am, married in Zaatari or Azraq. I told them that they should continue to go to school, that they are too young to get married. But they did not listen. I wish that other girls read what I write and think twice about their choices.” ©Johanna Mitscherlich/CARE

Ahead of the International Day of the Girl on 11 October, CARE warns that an increasing number of Syrian refugee parents are arranging marriages for their daughters due to economic hardship and concerns about the security and protection of their daughters in an unknown environment.

When Fatimah*, 16, reached a refugee camp in Jordan after fleeing Syria, she thought that her life had come to an end. But what she found was the passion and challenge of her life: advocating for education and against early marriage. CARE’s Johanna Mitscherlich spoke to Muzoon about her story.

The last thing I remember about Syria is my last day at school. It was the hardest day of my life. I have always been very ambitious and one of the top students in my class. I had only four weeks left to finish ninth grade when my father told my sister, my two brothers and me that we would have to flee to Jordan. I was yelling at him and screaming. He explained to us that it was not safe anymore, that people were getting killed and arrested. I did not care about our safety and told my parents that I preferred to stay in the middle of the bombings rather than having to leave my country. But in the end I kept quiet. I knew that if I made my family stay and anything would happen, I could never ever forgive myself. The only thing I knew about Jordan I knew from TV and I was horrified.

The next day I was sitting in my classroom. I did not listen to what my teacher was saying. My head kept spinning and the teacher’s voice sounded like a foreign language I don’t understand, a distant echo. My ears were deaf and I could not speak. It was like one of those dreams when someone is chasing you, but your legs are numb and you cannot move. I just wanted to process what was happening and prepare myself for my new life. I could not tell my teachers or my friends that I would never come back to sit in my seat in the second row. My parents told me that people might stop us from leaving if they would know about our plans. When I left I was the 20th out of 40 students in my class who did not return to class. Some had fled, some had died.

The next day we drove to the border. We waited until it got dark and then walked two hours until we crossed the border to Jordan and were brought to a refugee camp by people my father had to pay. On my first day at school in the camp, I sat next to a girl called Alia. Alia was beautiful, smart and a lot of fun to be around. She became a good friend. But a few weeks later, Alia told me that she is planning to get married. She kept telling me that she would be wearing a beautiful dress on her wedding day and that her husband would buy her all the clothes she would want to have. She dreamt of taking responsibility, to feel equal to the grown-ups around her. She said that with the crisis in Syria her childhood had ended anyway.

I am still angry when I think about Alia, but I also feel very sad. I spent days trying to persuade her to finish her school first. “Girls our age should be wearing a school uniform, not a wedding dress,” I told her. “Nothing can ever be better than studying. All these things you dream about might not come true. But when you work hard you can buy yourself the shoes you like and you can still get married when you have completed your studies.” But Alia did not listen. At got married a few weeks later, at only 15. I never saw my friend again.

As disappointed as I was, I also felt like I found a purpose in my life. Ever since I lost Alia as my friend, I want to fight against child marriage; I want to learn as much as possible and excel in school and become a journalist. I want to write about child brides, and I want to write for them so they know that getting married is not a solution. I want to tell them that getting married at an early age will mean abandoning their dreams and closing a lot of doors for their future. They will not have time to go to school, but will need to clean the house and prepare food for their husband. When they get pregnant, they are endangering their health.

In my past year in Jordan I have talked to many girls, my age or younger, who were planning to get married. I was able to persuade some of them to wait, and I have seen many more not return to class. A lot of times their parents want them to get married because they do not have enough money to feed all of their children. Some think that there is no point in sending their girls to school anymore, as their entire life has fallen apart anyway. I understand their reasoning, but I do not want to accept it. I know myself how horrible it is to flee and to leave your whole life behind. When we left, I could only take a small backpack with me. I had trouble deciding what I would put in there. My father came to my room while I was spreading all of my belongings on the ground and hysterically tried to make a choice. He put his arm around me and told me that it would not matter what I took with me. “All what you need is in there,” he said and pointed at my forehead. “Whatever happens in life, the only thing that no one can take away from you is what you have in your head.”

In each of the tens of thousands of tiny houses in the refugee camp, where I moved to a couple of months ago, people sleep and dream about what has happened to them in Syria, and what they wish for the future. Society has told them what is right and what is wrong, and girls are told that marrying early is acceptable and will make their lives better. But it should be for them to decide what is right and wrong for their own lives.

Girls are the foundation of our society. Girls will become mothers and they will tell their sons and daughters about the value of education. There is no better investment in society, in the future of entire nations than investing in a girl’s education. When I had to flee to Jordan I thought this will be the end of my life. But it really was the beginning of something new, the start of my life-long challenge to fight against child marriage and for education for my fellow, beloved Syrian girls.