CARE HomeBlogIndonesia Earthquake: “I am afraid to go home” 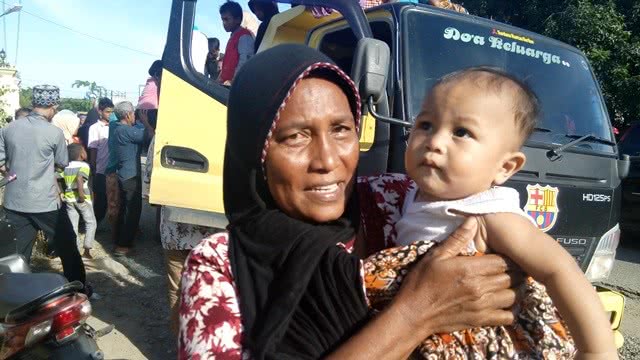 “I do not have money right now to feed my son. I have not received food for my son.” – Nurhasanah, 38, with her five-month-old son.

Wahyu Widayanto, CARE’s Emergency Response Manager in Indonesia is currently assessing the impact of the devastating earthquake which hit on Wednesday 7 December:

I arrived in Aceh on 8 December, the day after the earthquake hit.

Early reports indicate over 100 people have died, more than 660 are injured and 23,000 affected altogether. Thousands of buildings have been damaged – homes, schools, mosques and a hospital. With downed power lines, there is little electricity available at the moment.

Shortly after the earthquake, the mother of one of CARE’s staff travelled to the affected areas to see if her family was alright. Thankfully, they survived. But she saw many people crying and bodies under the rubble, with some people possibly still alive, as soldiers worked to rescue them. She met a woman from a family of five – of which four had perished. She was inconsolable.

A day later, I visited a mosque where many people displaced by the earthquake are staying. Some mothers told me their homes were completely destroyed.

Holding her five-month-old son in her arms, 38-year-old Nurhasanah told me: “I do not have money now to feed my son.”

There is a lack of clean water. Many are using dirty river water to wash their rice, for example. Many of those forced from their homes don’t have access to toilets. I counted only four toilets for people in one mosque and the surrounding area.

Some small local food and relief item distributions have started. The local government has set up mobile kitchens where mostly instant noodles and canned food is prepared.

CARE is leading a joint assessment with other humanitarian agencies to get a sense of the damage and determine if we can help the government’s response if needed. With a local partner organisation, we plan to distribute hygiene kits with essentials like soap, toothbrushes and toothpaste and sanitary items to families who have lost everything.

While it may take a few days for the full extent of the damage to be clear, we know from experience that after an earthquake of this scale, people will urgently need clean water, shelter, food and medical supplies.

Help us reach families affected by disasters like the Indonesia earthquake. Donate to our Global Emergency Fund.