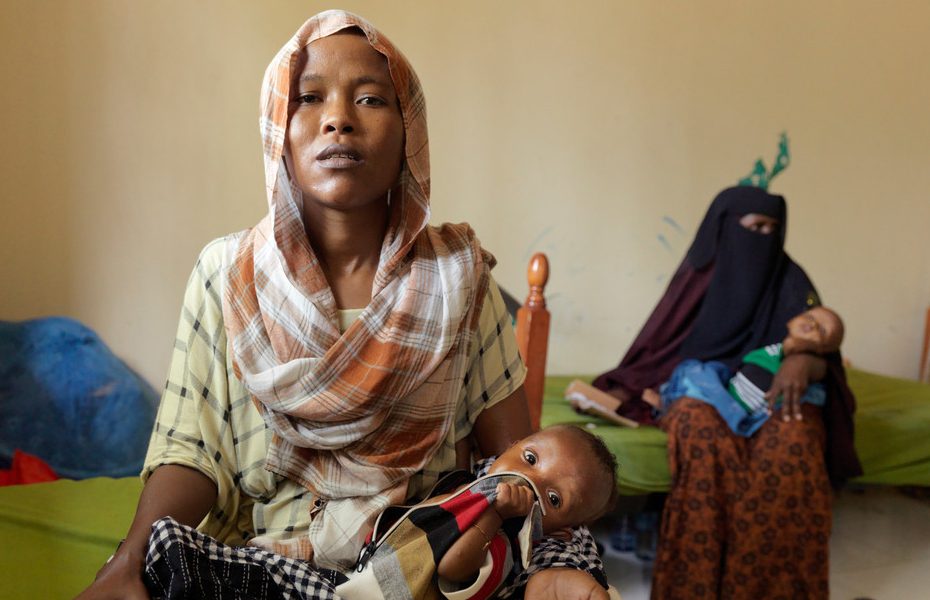 Fawsiyo sits on a bed in the hospital rocking and soothing her crying six-month-old son Mowlid. About 10 days ago, Mowlid started vomiting and having diarrhoea and it continued for days. Fawsiyo’s husband had travelled into the city looking for work, so she was caring for their five children alone.

Now, Mowlid was extremely ill. She knew she needed to get him to the hospital, but she couldn’t leave the other four young children with no one to care for them. She didn’t know what to do, but wait and hope Mowlid didn’t die before her husband got home.

For two days, Fawsiyo waited in agony for her husband to return before she was able to get Mowlid to the hospital. Luckily, she arrived in time for Mowlid’s life to be spared. Many children are not so lucky.

“This is a very common problem. After the drought has killed all of their livestock, many of the men are leaving their wives and children at home to come into the cities to find work,” said Hamdi, from CARE’s team in Somalia. “Many mothers who are alone with no one to help them with their young children, will find themselves in a position where they have to compromise the life of one child to save the others.”

In the camps where people are fleeing hunger to, CARE has treated over 11,000 severely malnourished children, and is caring for pregnant and breastfeeding mothers and their babies. Children are weighed and their arm circumferences measured to determine their nutrition level. Children like Fawsiyo, who are severely malnourished and have a medical complication, are then referred to the nearby hospital more advanced emergency treatment.

Once at the hospital, Fawsiyo comforts her sick baby, relieved that Mowlid will get treatment, but worried about her other children back home without her.

You can help CARE feed families like Fawsiyo’s by donating to our East Africa Hunger Appeal now.

We must hurry relief to these beautiful people! Tiny children living only days - this is what climate change will worsen.